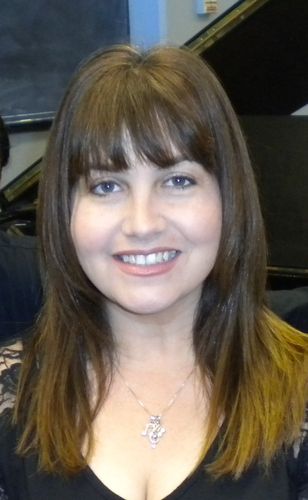 Kendra sang her first solo in church at age three and her first duet at age five (with her dad singing harmony).  Roger Jump, Kendra's father was a huge influence in her musical upbringing, teaching her to harmonize at a very early age.  Her family sang often together - music was just always a part of life! Kendra started playing the piano at age six and took lessons privately for about 8 years.  She played the flute for several years as well.  She sang numerous solos at church and at school.  At age ten, she was accepted as a member of the San Francisco Girl's Chorus and sang with them for two seasons.  During high school, she was the accompanist for the Mission College Prep High School choir for one year.  When she transferred to San Luis Obispo High for her senior year, she was a featured soloist on many occasions, starred as Rizzo in Grease, was awarded the Outstanding Vocalist award, participated in honor choir, and won solo vocal competition at Reno Jazz Festival garnering a scholarship to the Berklee School of Music in Massachusetts.

During Mrs. Vuk's undergraduate college career, she had many opportunities to grow musically.  She fronted a big band, sang for three years in the elite jazz ensemble and chamber ensemble at Cal State Long Beach, won several scholarships on musical merit, won Outstanding Soloist in the Moorpark College Jazz Festival, participated in several noteworthy master classes, and graduated cum laude with a degree in choral/vocal music.  Kendra started working as the section leader/soloist at the First Presbyterian Church of Santa Ana and kept this position for ten years!  She sang with the educational outreach ensemble, the Paul McNeff Singers and was first an accompanist, and later a director for Mr. McNeff's children's community outreach choir, Kidsingers.  Kendra also started working as a quartet caroler during the holiday season, first with Dickens and Company, and a couple of years later, with The Music Companie.  She was lucky enough to study under the late Dr. Lynn Bielefelt and tour and solo in Germany, Belgium, and the Netherlands in the summer of 2000 with her and an expanded Chamber Choir. Her voice instructors during this time were Nancy Jones-Johnson, Josephine Lott, and Marvellee Cariaga.

Kendra was planning to get her teaching credential and she completed all of her coursework toward the credential and then changed course and decided to pursue a masters degree instead! She had begun teaching private voice and piano during her undergraduate degree and she continued to build her studio as she began her Masters program in vocal performance at the Bob Cole Conservatory at Cal State Long Beach.  Mrs. Vuk studied with Marian Bodnar during her graduate degree and sung with the Chamber Singers for two years.  She won 1st place in the National Association of Teachers local competition in both the classical and musical theatre categories and was a awarded an Ella Fitzgerald scholarship in jazz studies (for her work assistant-directing the secondary jazz ensemble at CSULB under the supervision of Christine Guter). Kendra had the pleasure of participating in and soloing in many great oratorios throughout her college career.  Especially noteable was CSULB's Celebrating Music performance at the Carpenter Center where Kendra was a featured mezzo-soprano soloist for Beethoven's Mass in c minor.  Kendra's masters thesis was entitled "Jake Heggie - a comparison of four pieces."  She had the pleasure of interviewing Mr. Jake Heggie and performing a wide variety of his compositions during her master's recital (a couple of pieces are available here in the recording section).

Upon completion of her graduate degree, Kendra was hired at Orange County High School of the Arts (OCSHA) to teach two voice classes.  One year later, she was hired to teach private voice at the American Musical and Dramatic Academy (AMDA) and soon after, at the Stella Adler Academy of Acting.  Both schools are conservatories in Hollywood, CA and have exemplary reputations for "star-making."  In this same year, Kendra took a position at Covenant Presbyterian Church leading contemporary worship. Kendra also was offered the position of alto section leader in the Camerata Singers of Long Beach when Dr. Jonathan Talberg took over the group in 2005 and she continued to work there under the direction of Dr. Robert Istad until 2012. She also collaborated with her father on an original Christian CD called Sing For Joy.  Three songs on the album are her compositions and 5 are her father's compositions that she arranged.  The CD is available for purchase :) You can hear the title song above! Kendra has led worship and directed choirs at several local churches over the last ten years.

In 2008, Mrs. Vuk was offered a position at Los Angeles Harbor College in Wilmington, CA.  For the last  11 years, she has taught voice classes, applied voice, choir, and music theory.  In 2010, Kendra garnered a position at California State Polytechnic University, Pomona to teach commercial voice students and voice class. She has also led a vocal jazz ensemble at Cal Poly since 2014.  In 2017, Kendra started also teaching voice and voice class at CSU Dominguez Hills as well.  In the fall of 2019, Kendra was promoted to lead the vocal majors as the voice area coordinator.  She now teaches musicianship, voice, private students, vocal/choral techniques and conducts the University Choir.  She also  maintains a private studio of voice and piano students in Long Beach, CA.   She is a member of the National Association of Teachers of Singing (NATS) and MTNA and continues to occasionally adjudicate, record and perform in a variety of venues. Kendra joined a rock band called Lady Velvet, which morphed into Evolution of Eve , a female led rock group - she participated in that group and performed for two years.  Kendra currently  leads a jazz trio/quartet called Swing Set and recently started a duo project with a friend and fellow musician, Aron Ortega (Aron Allyn).   She regularly performs solo gigs in the community and quartet carols professionally  (for the last 25 years) and currently sings with both The Music Companie and The Other Reindeer in full Dickens-style garb :)